WHAT: Compete in The Everest Marathon

Mount Everest – a name synonymous with endurance and adventure on a biblical scale. Whether it’s the landscapes, temperatures, or physical and mental challenges, everything about this region is in a league of its own. And the annual Everest Marathon route is no different.

Following The Footsteps of Mountaineering Legends

Also named the Tenzing Hillary Marathon, the race commemorates the date of Everest’s first successful ascent by Everest icons Sir Edmund Hillary and Sir Tenzing Norgay on 29 May 1953. On that date each year, runners gather at  Everest Base Camp, on the edge of the 5,400, Khumbu Icefall to partake in the Everest Marathon. It’s the highest altitude marathon in the world.

A Challenge Unlike Any Other

The Everest marathon is more than just a race. It’s a physical and mental challenge as sublime and rewarding as it is grueling. The route features icy, rocky, and often precarious downhill paths connecting the Khumbu icefall with the finish line. Runners have to contend with high altitudes and hazardous terrain, their bodies gasping for air as lactic acid pools in their shattered legs. However, most entrants say the surrounding scenery is a great distraction from the physical punishment.

Officially, the Everest Marathon is recognized by the Guinness Book of Records as the world´s highest marathon. Unofficially, it may be the most adventurous, memorable, and rewarding race out there, the cold temperatures offset by the warmth of the Nepalese people and their unique and spectacular culture. 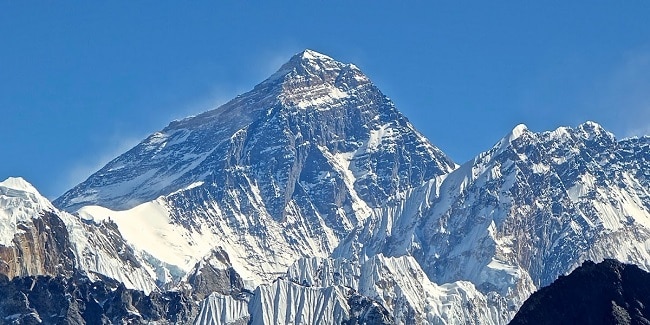 If you think you have the minerals for this unique, challenging Himalayan adventure, head to the official Everest Marathon website and complete the registration, medical, and payment forms.

How Long is The Everest Marathon

The Everest Marathon offers runners three categories to choose from depending on their abilities. 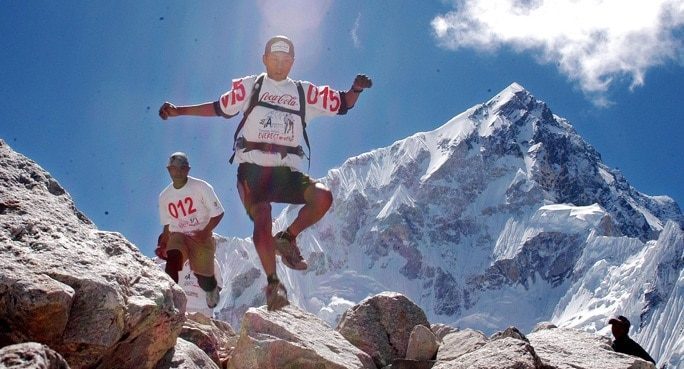 The race is open to anyone 18 or above. But before pinning on your number bib, you’ll need to provide proof you won’t end up the target of a Sherpa search and rescue mission. You’ll need to demonstrate some running experience, a proven ability to withstand the altitude, and a valid health insurance policy. You’ll also be expected to show up with the required clothing and navigation equipment.

The Trek To Everest

Once the details are squared away, the adventure begins with a 12-14 day trek to Everest Base Camp. The route winds its way through verdant forest trails and sherpa villages where you’ll bunk down for the night. Many runners claim that the toughest part is making it to the start line. The slow, tiring, uphill trek to Everest is more than just a rite of passage. It is a vital way to acclimatize and prepare your mind and body for the marathon.

You’ll be Wiped Out Before You Even Start

Typically, marathon runners eat, sleep, and rest to prepare for a race. This is no typical race. Those that make the start line (not all do) will be worn out, hungry, and sleep-deprived. And, they’ll need to be ready to run.

The following morning, the pistol signals the start of a brutal 65-kilometer descent through rough, cross-country terrain, beginning at the Khumbu Glacier and descending into the Himalayan foothills and the majestic Sagarmatha National Park. Although most of the race is downhill, one or two uphill sections will test the best, most notably a 3-mile uphill climb to Lukla, after which the finish line is close.

During the race, runners are supported by experienced local sherpas and support crews. Doctors are present to monitor runners’ physical condition, and organize emergency evacuations if necessary. Runners are provided with an electronic wristband that allows organizers to monitor their progress. Once the race is underway there is an official timekeeper, teams of marshals, and regular checkpoints where runners may eat and drink.

When is The Everest Marathon

The Everest Marathon begins on May 29th, the same date each year.

The Everest Ultra-Marathon route begins at Everest base camp and runs 65 kilometers between Everest base camp and the town of Namche Bazar in north-eastern Nepal. The fastest runners usually make the finish line within the day. Others choose to pit stop the night at a local lodge and make up the remainder the next day. The standard marathon and half marathon follow sections of this main route. In 2006, Deepak Rai set a new Everest Marathon route record of 3 hours, 28 minutes, and 27 seconds.

May 18, 2022
Read More »
PrevPreviousSurfing Skeleton Bay: The Endless Barrel At the Ends of the Earth
NextHike the Tepui in VenezuelaNext