WHAT: Hike The Tepui in Venezuela’s Canaima National Park

Remember the kid’s movie about a disgruntled old man who transforms his house into an airship bound for South America? If you’ve seen “Up”, then you’ve seen the Tepui. A series of vertical landmasses rising up through the Amazonian clouds in Venezuela’s Canaima National Park. In recent years, more and more plucky adventurers are heading to Venezuela to attempt to hike the Tepui. Here, they can visit Angel Falls, the world’s highest waterfall, and the crown Jewel of Venezuelan hiking attractions.

What Are The Tepui?

The Tepui tabletop mountains, or ‘mesas,’ are the remnants of an ancient South American supercontinent named ‘Gondwana‘. Over tens of millions of years, rivers formed and washed away enormous chunks of earth. As a result, vertical landmasses formed upon which sprouted a natural terrain utterly unlike any on earth.

In 1884 British explorers Everard IM Thum and Harry Perkins became the first Europeans to hike the Tepui. After that, Sir Arthur Conan Doyle heard tales of their high-altitude trek through mesmerizing, misty cloud forest. Consequently, he was inspired to write “The Lost World,” from which Jurassic Park took its cue. 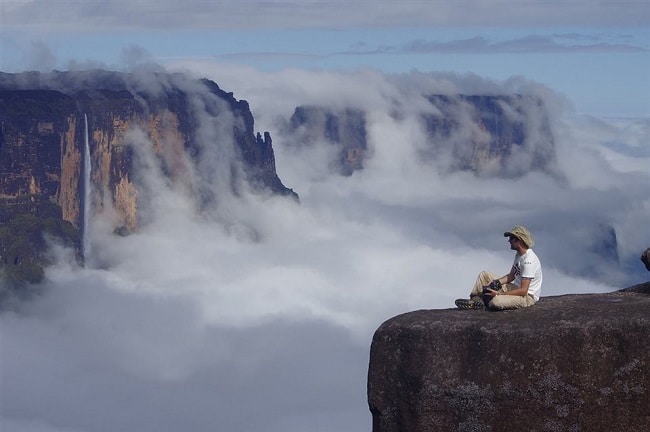 To Hike the Tepui is a Biologists Dream

There is a huge difference in altitude and temperature between the sea level jungle and the Tepui platforms. Moreover, vertical rock walls and millions of years separate the two areas. Consequently,  perfectly isolated ecological islands have emerged that contain all manner of undiscovered plant and animal life. Anyone hiking the Tepui won’t run into the dinosaurs of Conan Doyle’s imagination. However, the Tepui are still home to countless strange beasts, many of which don’t even have names.

This one-of-a-kind evolutionary petri-dish is home to flora and fauna you won’t find anywhere else. For example, biologists have discovered flowers, lizards, frogs, spiders, a bewildering variety of carnivorous plants, and more. Similarly, returning biologists have noted that some Tepui sinkholes are “islands within islands.” Amazingly, they contain species endemic only to that single sinkhole. 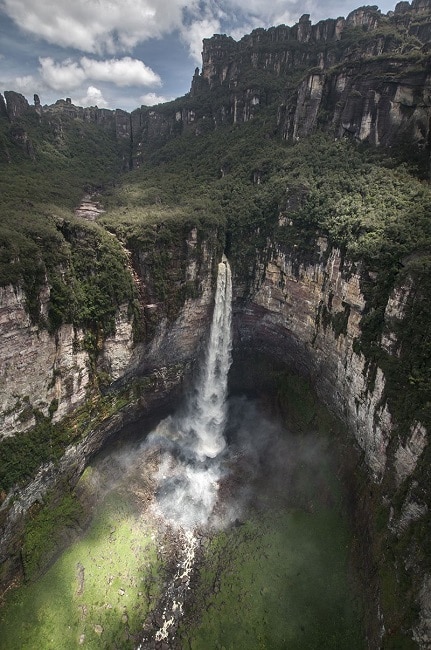 Hike the Tepui to The World’s Highest Waterfall

To hike the Tepui, hikers must ascend semi-sheer granite walls.  Multi-million-year-old, rainbow-streaked waterfalls have smoothed out some of these walls. The most famous example is Angel Falls. At one kilometer high, this mighty cascade of crystalline mountain water is the highest uninterrupted waterfall on earth. Eventually, you’ll reach the top. After that, if any of your mind remains unblown, the unique, prehistoric wilderness that awaits should finish the job.

Unfortunately, some of the most spectacular Tepui are off-limits to all but ultra-competent climbers. Or, those with access to a helicopter, piloted by an unhinged maverick capable of landing on uneven terrain in fog. However, Canaima National Park contains plenty of other Tepui to explore. These can be reached either by the trails from the base, or via a climb. Both options require a guide, particularly for first-timers.

Which Tepui to Hike?

Hiking in Venezuela is generally mellow, and the Tepui are not the Himalayas. Nevertheless, to hike the Tepui you’ll need to be in decent hiking shape. Importantly, hikers should note that their supplies are limited only to what they carry uphill for a prolonged period. Many routes, particularly the quicker ones are tough, tricky, and occasionally nerve-wracking. Mount Roraima is the tallest of the Tepui, and one of the most breathtaking climbing locations in South America. All in, groups take around 8 days to ascend, hang out, and descend. 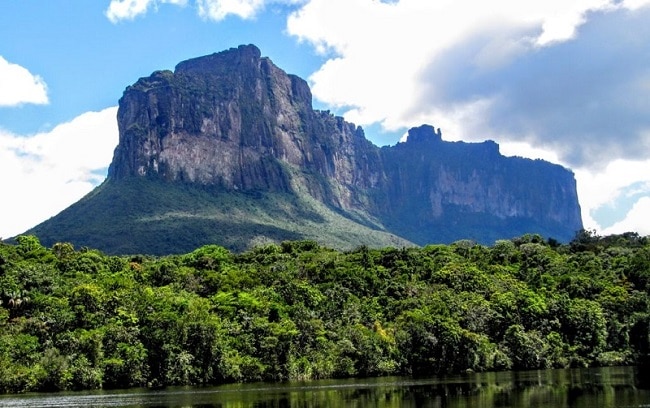 Mount Roraima sits on the borders of Brazil, Guyana, and Venezuela in Canaima National Park. The only hiking route that doesn’t require climbing gear, experience, and sheer guts is the Paraitepui route from Venezuela. Anything else is both extremely difficult and probably illegal. The Brazilian portion of Mt Roraima is indigenous territory, and closed to the public.

No hike up the Tepui would be complete without a trip to Angel Falls. Angel Falls is the world’s highest, tallest waterfall and a true wonder of the natural world. In the Pemon language, Angel Falls translates to Kerepakupai Merú meaning “waterfall of the deepest place.” The water cascades down uninterrupted for nearly one km, hitting the jungle floor below.

Angel Falls was unknown to the outside world until 1933. It was discovered when US pilot and all-around madman Jimmie Angel landed atop of Auyan Tepui. He sunk his plane in the mud, and hiked for 11 days to get back to ground level. News spread of his adventure. Consequently, the world’s highest waterfall was named in his honor. Nearly a century later, landing a plane atop of Auyan Tepui is still a stupid idea.

Hiking in Venezuela can be a wet affair. The Amazonian dry season runs from late September to April. However, the Tepui wouldn’t be the Tepui unless they were drizzly all year round. Consequently, you’ll need your wet weather gear.

Most of the Tepui are located within Venezuela’s Canaima National Park, a UNESCO World Heritage Site. Mount Roraima is located in the southeastern corner of the park, bordering Brazil and Guyana.

Fly into Puerto Ordaz or Cuidad Bolivar. From there drive to Canaima camp, and take the boat upriver to the base of the falls and the beginning of the hike to the Tepui.