Above photo by Greg Ewing. Check out more of his work at www.gregewingphoto.com

To understand why Namibia’s Skeleton Bay may be the holy grail of the surfing world, it helps to understand the components that constitute perfect waves.

The world’s most coveted waves feature at least two of these components. For instance, Teahupo’o in Tahiti and Banzai Pipeline in Oahu offers advanced surfers fast, truck-sized tubes. Moments after takeoff, they get blown from the tube like salt-soaked human bullets, and the ride is over. Pavones in Costa Rica or Chicama in Peru produce picture-perfect, kilometer-long rides but few if any tube sections. Then, there’s a handful of waves, such as Australia’s Superbank or Jeffreys Bay in South Africa, that feature everything surfers salivate over in one single package. Big tubes, long and fast rides, and not a drop of water out of place.

The Best Wave in The World?

Surfers are natural explorers. They’d already mapped, flown over, and driven across the world’s coastlines thousands of times over. Consequently, the “best wave in the world” conversation was considered closed. Then, in 2008, Surfing Magazine launched the “Google Earth Challenge,” inviting readers to use the program to identify the next surfing Shangri-la. The winner would receive an all-inclusive trip to the location accompanied by a team of pro surfers.

Many readers answered the call, including Brian Gable, a California software engineer. After days spent scouring satellite images, Gable submitted his entry, pinpointing Skeleton Bay on Namibia’s ultra-remote Atlantic coast. When the judges evaluated Gable’s findings, they reached an obvious conclusion: Gable had indeed found something special. Only when they arrived would they discover first-hand just how special.

Skeleton Bay: The Ultra-Marathon of Surfing

They couldn’t believe their eyes. Namibia’s Skeleton Bay was a bonafide natural miracle; an endless left-hand point break peeling perfectly for miles, churning out tube after massive tube, so fast that a wrong line could turn a dream ride into a nightmare. In contrast, picking the right line and holding on tight would give riders more tube time in one wave than they’d otherwise experience in their entire surf career. It was like riding six-foot pipeline for two miles. And when the ride was eventually over, anyone with the remaining leg strength could simply jog back up to the point and go again.

Before the Surfer mag expose‘, Skeleton bay was a revered, supernaturally good point break spoken of in hushed tones by only a handful of hardcore South African surfers. When the first footage and pictures appeared, the wave exploded into the limelight. The surf community was stunned, not only by the perfection of the waves but how it had managed to remain secret for so long. Nowadays, Skeleton Bay is still as good as ever. All you have to do is get there.

Getting to Skeleton Bay

You can either make the 24-hour drive from Cape Town, or you can fly into Walvis Bay, Namibia, and drive to Skeleton Bay from there.

Either way, you’ll need a solid 4×4, a wetsuit, an extra surfboard in case one snaps, water, food, and a first aid kit. Watch out for skull and bones roads signs warning you to go no further and don’t feed the lions. You’ll also need to be a competent surfer.

Portuguese sailors called the region the “Gates of Hell.” Namibian Bushmen named it “The land God made in anger.” In truth, the 17,000 km2 Skeleton Coast National Park takes its name from the remains of whales and seals left littered on the shore by the once-booming Whaling industry. The title could just as well apply to the skeletal remains of the thousands of shipwrecks claimed by fog, rocks, lousy weather, and big waves. 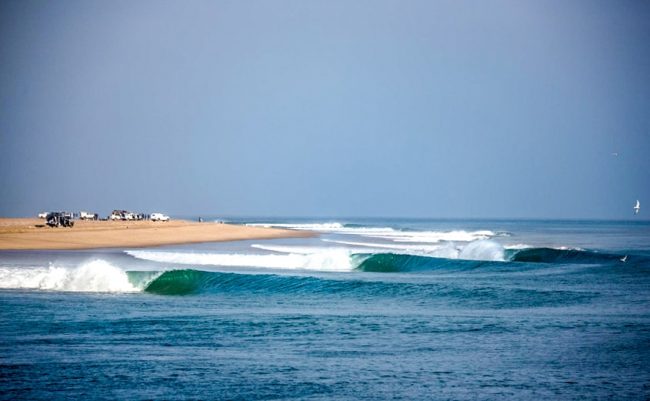 May 12, 2022
Read More »
PrevPreviousHOLOTROPIC BREATH WORK: How To Get High on Breathing
NextEverest Marathon: The Worlds Toughest High Altitude RaceNext