WHAT: Hiking The Darien Gap

Hiking The Darién Gap – a 100-mile wide, untouched strip of swamp, mountains, and dense jungle connecting the fuzzily drawn Panama Colombia border is as risky as it is rewarding. Despite a wealth of natural, cultural, and material treasures, the Darien gap, AKA – the “world’s most dangerous hike,” remains one of the least attempted journeys on the planet. To plucky travelers, hiking the Darien Gap may sound like a dream come true. However, deaths on the Darien Gap occur daily. Before buying a plane ticket, you should probably understand why the Darien Gap is considered the most insanely dangerous place in the Western Hemisphere.

Why is the Darien Gap so Dangerous?

The Darien Gap is dangerous for many reasons. However, the biggest danger is the people. Both sides of The Darien gap are a hideout for Colombia’s Marxist Revolutionary Armed Forces (FARC). During FARC’s 60-year guerrilla insurgency against the Colombian government, their rap sheet has included assassinations, kidnappings, and murder. Then, there are the drug traffickers. Their control of the only land routes connecting Colombia with North America is essential to their business.

As well as heavily armed, trigger-happy outlaws, the route is a migrant corridor. In recent years, traditional pathways to the U.S have shrunk. The only hope for many refugees from Asia, Africa, and beyond is to touch down in South America and head north. There are countless dangers along the way, but none compare with the dangers of crossing the Darien Gap. It’s not the migrants you need be wary of, but the coyotes that smuggle them.

Violent deaths on the Darien Gap have been occurring for centuries. It’s notoriety for chewing up explorers is nothing new. For centuries, the impenetrable jungles, lost civilizations, 5000-year-old petroglyphs, and jade and gold resources have lured bold souls. Not all of them returned. Even the Spanish conquistadors realized any attempt to tame the place would be fruitless. When they left, the merciless environment became a vacuum for wanted criminals seeking somewhere to lay low. Centuries on, crossing the Darien Gap is to enter the most lawless place on earth. Hikers and explorers claim that the world’s most dangerous hike it’s also one of the most spectacular.

Although Darien Province is accessible from Colombia, most foreigners choose the Panama route. Entering the Gap from the north begins in earnest when you reach Yaviza, the last town on the Panamanian side of the Pan-American Highway. Along the way, expect numerous police and military security checkpoints. To gain access into the neighboring province of Darién, you’ll need a passport and official permits from Senafront – Panama’s border police. These can be arranged through local tour companies.

In Yaviza, you’ll find Spanish and English-speaking guides with the required local knowledge and jungle skills. The best guides have connections with the native peoples and a keen awareness of the no-go zones. You’ll need solid hiking boots and wet weather gear if traveling outside dry season. Dengue fever is a constant danger in this part of Latin America. Although it’s unlikely to kill you, dengue AKA – the “bone-crushing” fever will knock you out and make you feel like you’ve been hit by a train. Ensure to stock up on mosquito and bug spray.

On average, camping trips last between 3-5 days. After that, you can return to base. Or, you can make the highly unwise decision to press on alone.

There are many good reasons why the Darien Gap is considered the world’s most dangerous hike. Native tribes aside, it is the domain of drug smugglers, terrorists, mercenaries, and kamikaze journalists. The surest way of avoiding death on the Darien Gap is to deal with those who control it. The few reporters who enter do so only with negotiated permission from the paramilitaries that share control of the routes with the narcos. If you plan on attempting, you’ll need to make contact with them. To do this, you’ll need to ask local insiders for help. If given, you’ll then have to negotiate with FARC.

The traditional way to acquire FARC permission is by somehow convincing them you’re capable of shining a positive light on their cause. Gaining an audience with these guys is a tough negotiation. However, it’s easier and a helluva lot safer than asking the cartels.

The Colombia / Panama border. The Darien Gap is the single missing link in The Pan-American Highway, a masterpiece of modern engineering which stretches 19,000 miles from Alaska to Argentina, uninterrupted, except for The Darien Gap. 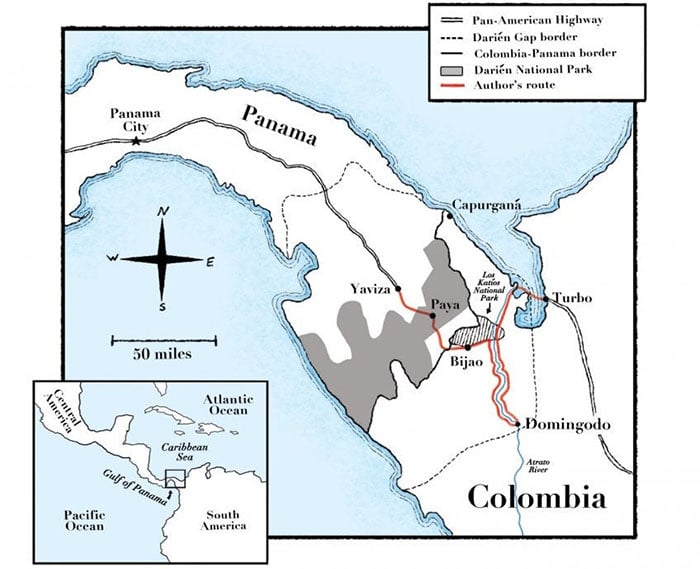 Robbery, kidnapping, murder, malaria, dengue fever, snake, scorpions, spiders, dirty water, Spiked Chunga palm trees, and more combine to make the Darien Gap the deadliest hike in the world. Then, there’s the narcos, rebels, and people smugglers. It matters not whether their cause is politics or profit. All the groups operating in this legal dead zone are heavily armed, trigger happy, and distrustful of strangers. Violent deaths on the Darien Gap are commonplace.

Conquistadors first tried crossing the Darien Gap over 500 years ago. Since then,  its inhabitants have resisted the advance of colonists, developers, biologists, and others seeking to penetrate its interior. Centuries on, the area between Panama to Colombia remains shrouded in mystery. It’s a secretive, mythical land of misty mountains and rare plants and animals. It’s also home to some of the last true indigenous hunter-gatherers on earth. Explorers can expect to meet the indigenous Embera and Kuna people. There’s also a wealth of petroglyphs, ruins, and other ancient cultural remnants.