The riding surfaces are primarily gravel and dirt roads. Consequently, it’s no great technical challenge. However, attempting The Great Divide mountain bike route shouldn’t be taken lightly. What makes it so difficult is the sheer volume of miles covered daily. Meanwhile, you’ll need to navigate, resupply, maintain your bike, find or make shelter, and keep your wits about you.

In 2009, National Geographic Magazine ranked the Great Divide Mountain Bike Route as one of the all-time greatest American adventures. The challenges are many. However, riders who are prepared, fit, and equipped are in for one of the most adventurous, memorable experiences in the mountain biking world. 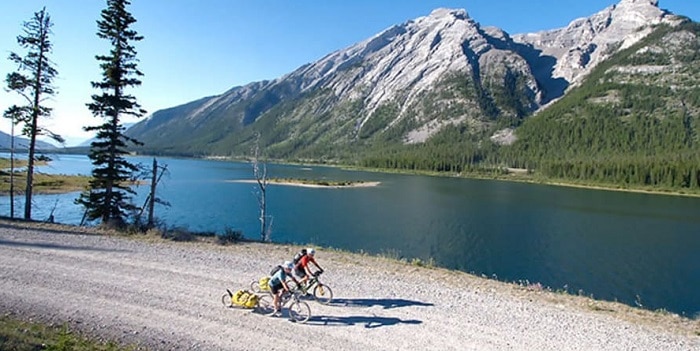 The Great Divide mountain bike route’s reputation for humbling hardened biking egos is well deserved. An estimated 60% of riders never make the finish. Consequently, you should ask yourself the following questions before committing:

Which Route Will You Take?

Most people ride the Great Divide Mountain Bike route from north to south. Due to weather conditions, southbound riders must begin no later than mid-June. From there, they have until the end of September to make the finish.

How Long Does the Great Divide Mountain Bike Route Take to Ride?

The Great Divide Mountain Bike route burns a ton of calories. However, accommodation and reliable water and food stops are over 160km apart in many sections. In addition to camping and cooking kit, you’ll need bike maintenance equipment. You’ll also be weighed down the food and water necessary to fuel you through long sections.

Riders must endure rain, sleet, snow, strong winds, and temperature extremes at all times of the year. Attention to weather and climate conditions is essential. However, even with extensive preparations, riders can expect rain to turn dirt roads into impassable muddy quagmires. Riders have two options. Firstly, they can wait for the roads to dry out. Alternatively, they can carry their bike through lake-sized sections of mudwater.

The Great Divide Mountain Bike Route is home to a ton of death-dealing mammals. These include moose, Grizzly bears, black bears, and the odd mountain lion. In addition, the blackflies and mosquitoes take no prisoners. Bear spray and insect repellant are essential items.

Very little of the route is signposted, so you’ll need map reading skills. In recent years, various long-distance cycling organizations have put together detailed route maps outlining directions and the most convenient camping and resupply options. Above all, remember you’ll be crossing between Canada and the US. So don’t forget your passport.

The Great Divide Mountain Bike Race is a self-supported, underground dash that attracts competitive endurance cyclists from around the globe. The race clock runs 24/7. Consequently, riders are free to move at their own speed and according to their own limits and capabilities.

In 2016, British endurance racer Mike Hall set a new record when he completed the Tour Divide Race in 13 days, 22 hours, and 51 minutes.

The Great Divide Mountain Bike Race has no entry fees and no prizes. It begins annually on the second Friday in June. After that, it’s three weeks of back-to-back riding for up to eighteen hours a day. So, if you think you’re capable, contact the organizers.

April 26, 2022
Read More »
PrevPreviousSearch For The Tasmanian Tiger
NextLearn To Freedive: Meet Your Deepest Self In The Deep OceanNext