Overlooking Lake Mansarovar, in the Gangdise Mountains of western Tibet, stands Mount Kailash, meaning the “Precious Jewel of the Eternal Show.” By Himalayan climbing standards, Kailash is not particularly high and not that hard. Yet, despite numerous campaigns to reach the 6,600-meter summit, it remains one of the world’s highest unclimbed mountains. So, why has nobody ever climbed Mount Kailash?

In 1936, Austrian climber, Herbert Tichy, wanted to be the first to climb Mount Kailash. Before setting off, a local monk told him, “only a man entirely free of sin can climb Kailash.” Tichy turned back.

In the 1980s, iconic mountaineer Reinhold Messner was granted permission to climb Mount Kailash. He declined, stating that ”If we conquer this mountain, then we conquer something in people’s souls.”

In 2001, the Chinese Government issued permits for a Spanish team to make the ascent. The ensuing backlash from religious groups came swift and sharp. Chinese authorities reacted by denying they’d ever issued the permit and officially declared the mountain permanently off-limits. Once a mere sin, attempting to ascend Mount Kailash AKA-The door to Moksha, was now a heavily punishable crime.

Why has nobody ever climbed Mount Kailash?

Shrouded in mystery and legend, Mount Kailash is the spiritual epicenter of not one but four different religions – Buddhism, Hinduism, Jain, and Bon (the precursor to Buddhism.) As it stands, no one has ever climbed Kailash, and no one ever will. To do so, say locals, would be an insult to the gods and guardian spirits that reside there.

Just because you can’t climb Mount Kailash doesn’t mean you can’t visit, which a few thousand physically fit devotees do each year. Upon arrival, they attempt to complete one of the world’s toughest, coldest pilgrimages. 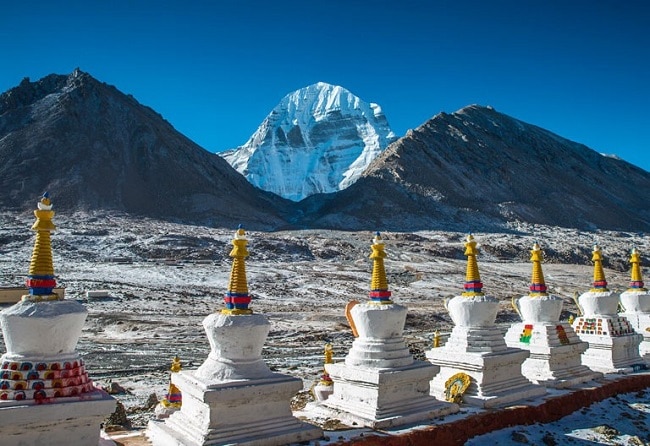 There are many mysteries surrounding Mount Kailash. The most significant is the Buddhist belief that a single kora (32½-mile circuit) of Mount Kailash erases the sins of an entire lifetime. However, if you wish to reach nirvana in this lifetime, you’ll need to complete 108 of these circuits, which works out to just under 3500 miles in freezing temperatures. Whether anyone has ever achieved this in a single run is unknown. However, a few committed individuals are known to return annually, hoping to complete the 108 circuits in this lifetime.

Getting To Mount Kailash

Before you even consider a stroll around the base of Mount Kailash, you’ll need to get there. As well as being one of Asia’s most venerated sacred sites, Mt. Kailash boasts the unique distinction of being the least visited. Kailash sits in the remote far western hinterlands of Tibet. Even passengers traveling in rugged overland vehicles must prepare for days of dangerous and difficult travel, where the weather can switch from cold to deadly freezing in minutes.

Amenities include the odd bench, resting area, and an occasional roadside vendor selling refreshments. However, any pilgrim who turns up lacking the supplies required for the entire journey will be turned away. Getting to Mount Kailash is challenging. However, according to spiritual devotees, the payoff is monumental.

On a practical note, this part of the Tibetan Himalayas is under Chinese jurisdiction. The visa application process can be tricky. Applications run a lot smoother if processed through a registered travel company.

Mount Kailash is located in Gangdise, on the outskirts of the Trans-Himalayan mountain range in the Tibetan Autonomous Region of China, at 30.6615° N, 81.4718° E 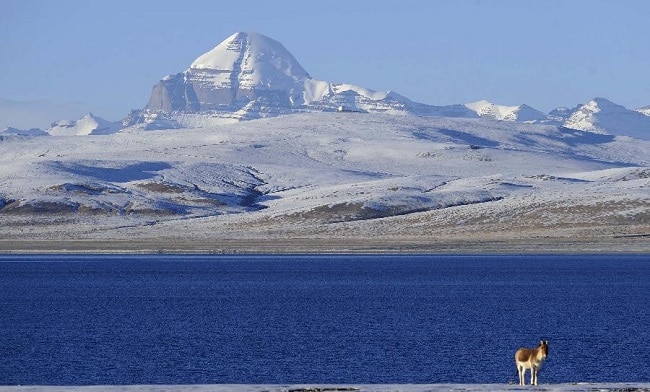 May 12, 2022
Read More »
PrevPreviousThe Gaucho Derby: The Patagonian Horse Race at The Ends of the Earth
NextSetting A World Record: A Slackers Guide to Entering the Guinness BookNext